Learning from the best, starting with mum and dad

When he joined Tenaris 13 years ago, Scott Barnes, technical leader at Aberdeen’s service center in Porthleten, Scotland, couldn’t have predicted the path that led him to his current position, a circuitous route that gave him the opportunity to hold several different jobs in different production areas at the facility.

Barnes first learned his way around Tenaris not as an employee, but as a visitor. His parents both worked there cleaning the Minto Avenue offices at night. At the time, Barnes was working two streets away, and when he finished work, he’d join his mum and dad, working alongside them to help finish the cleaning so they could drive him home. His parents passed on a work ethic that has served him his entire career.

After some time, the plant manager noticed his work and offered him a job. Barnes took the opportunity to make a change. As a cleaner, he found his way all through the workshop and the plant. However, he didn’t stay there. He was then hired in the phosphatizing area, which creates a protective layer on pipes. There, he met Avelino Muñiz, a Mexican colleague and plant manager, who changed Barnes’ working world.

“[Muñiz] was a very open person, very willing to let people learn new things, giving them opportunities to have different experiences, teaching a lot but also being always available to listen to people’s ideas,” said Barnes. “He respected his workers, so he received a lot of respect back. He would always give you confidence that you could succeed in a new task, so he really has been very helpful for me to understand the processes and jobs in the plant.”

Scott's parents and sister accompanied him throughout the Tenaris journey.

Barnes stayed in phosphatizing for a year and a half, and then moved for four years to the swaging machine, which alters the diameter of the pipes. The learning and confidence he gained with Muñiz came with him. His next challenge was with the CNC machines, which threads the pipes.

Barnes had to learn a lot in order to rotate through the facility. “Working on the threading CNC machines, you feel a lot of pressure and responsibility, but it’s a very good position to grow in your professional knowledge and expertise.”

He didn’t stop there. After an eight-month pause, the service center yard hired him to finish the pipes before they were sent offshore, and then six months later, he was accepted to work in the gauge shop, where he met another pivotal supervisor, Lex Jarvie, “a very tough old school guy, very competent, from whom I learned a lot,” said Barnes.

Barnes noticed that each time he changed roles within Tenaris, the company supported him, giving him the needed training to do each job and allowing him to learn from each new experience.

In 2019, Barnes got a call about an opportunity to be a yard inspector at the Aberdeen service center in Porthleten, Scotland. Even though he was very much enjoying his work at the gauge shop, it was a great chance to grow even more, and he couldn’t pass it up.

It turned out to be a good decision. Barnes found another group of colleagues willing to share their learnings. His first supervisor was a tremendous teacher and professional who transferred his knowledge to Barnes. When he left, Barnes covered his place as technical leader, where he is today.

The small team at the service center works in a united fashion and have gotten to be very close, each supporting the other.

After such a varied career at Tenaris, Barnes offers this advice to others starting: “I would say to be patient, not to jump too quickly, work hard and try to learn from every experience and each position. If you have this attitude, the company will recognize it and will support you in your professional skilling and career growth.”

And of course, he would pass along the learning he gained from his mum and dad, who from the beginning instilled in him and his sister a strong work ethic. Barnes sums it up by saying, “When you work, you work hard, always try to do your best, and make sure that you create a happy work environment.” 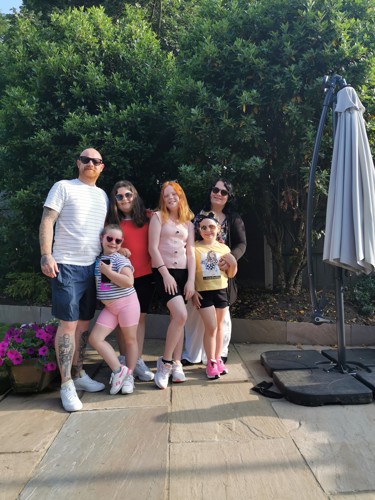 Scott and his family.

Our brand name is derived from the word tenacity, representing our determination to serve our customers wherever they are and pursue and achieve the goals that we set ourselves. It is about striving for excellence in everything we do.
The colors in our multi-bar represent the diversity of the people that make up Tenaris around the world.

Our Site uses cookies. By using our Site (through any device) you agree that these rules on use of cookies apply. Further information on these cookies can be found in the Terms & Conditions.  We may revise and update the applicable rules at anytime, therefore, we recommend visitors and users to periodically review the rules of use of cookies to ensure that visitors and users are aware of any changes.